TWENTY SIX MILES ACROSS THE SEA

The Edgewater is built on one of those lots originally purchased from William Wrigley, Jr. in the 1920’s. Vincent Petrich purchased the lot from Wrigley and built the Vincent Apartments on it in 1922. Later, the apartments were converted into hotel rooms and it became The Edgewater Hotel. Vince then married Louise Taylor and they opened and operated a variety of businesses within The Edgewater Building. It has been home to The Silver Dollar, Brazil Club, a tobacco store, an ice cream parlor, John’s Cafe, a Pool Hall, Weezies’ Basket Bazaar, Weezies’, and one of the oldest souvenir shops in Avalon, The Catalina Souvenir Shop which her son Bill opened in 1947 and his wife Beverly continued to run for over 60 years. Four generations have owned and operated businesses within The Edgewater Building. The Edgewater Team welcomes you to enjoy your stay at The Edgewater.

Catalina Island has something for everyone! Avalon is filled with an array of activities, attractions, and dining options that are sure to please. Below are some recommendations of our island favorites including recommended dining, shopping, water sports, hiking and more.

Get out of town and head to Pebbly Beach for lunch or dinner! Try their famous "Pasta Night" every Monday. The Nickel offers complimentary transportation to and  from Pebbly, call to learn more.

Located at the edge of the Catalina Island Golf Course, this is a great spot to grab breakfast, lunch or dinner! See Pedro at their patio bar for great margaritas, Buffalo Milks and other festive island cocktails!

The Brew House serves morning pastries, cakes and fresh coffee. They feature their own "Catalina Island Brew" as well as a specialized wine menu. This spot is perfect for a quick bite and gorgeous views. Try their Flat bread pizza and pretzel rolls!

Avalon's Newest waterfront donut shop! Grab a donut, cup of joe and be on your merry way. Apple Fritters are a must!

Located downstairs from our guest rooms, and serving as our front desk location, Weezie's is the island's newest resort boutique! Come experience our bright and fun clothing, accessories and flowers. We are a Lilly Pulitzer Specialty Store and carry Vineyard Vines, Sail to Sable and more! Hope you love pink!

Talk about vintage, the Catalina Souvenir Shop was established in 1947 and is still around today! Pop in for souvenir trinkets, Tahitian Pearls, and special island & nautical items. CSS is conveniently located directly below The Edgewater.

Built in 1929, the historic Catalina Island Casino Building boasts a ballroom, Avalon Theatre, gorgeous murals and classic Catalina Tileworks. This is a must see while visiting the island. Daily tours are available of the Casino and nightly showings of features films are played in the Avalon Theatre.

Established by P.K. Wrigley in the 1950s, the Catalina Museum features an array of historical items, photos and occasionally themed exhibits. If you are curious about the history of our beautiful island, this is the place to go!

You haven't truly experienced Santa Catalina Island until you've gone out in "the hills". View the island's rugged interior, pristine coastline and flora & fauna. You can experience the island like a local on Wet Spot Rentals' Little Harbor Outback Tour!

Discover Catalina's vast coastlines from the comfort of a kayak or in the water via fins and snorkel by renting from Wet Spot Rentals. Venture to Lover's Cove, a protected marine reserve, and view the island's kelp forests and marine life.

Zip Line through Descanso Canyon on the most popular Zip in Southern California. If you're daring, try the thrilling Night Zip where you will travel faster down the five lines in complete darkness and learn about Catalina's nocturnal locals!

Relax & recharge in the privacy of your very own cabana at Descanso Beach Club! Take time to marvel at your spectacular surroundings, breathe in the salty air and bake in the sun! Prices change seasonally.

Explore Catalina by foot on an array of hiking trails. Popular routes include Pebbly Beach Road, Mt. Ada, Hog's Back, The Wrigley Memorial and if you're adventurous...Hermit Gulch trail where you can view the other side of the island. 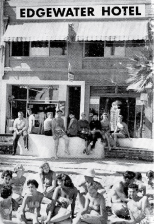